Art imitates life, but what do Architects of American Homes imitate?

Most of the architecture in the United States has historically been an imitation from the birth places of the immigrants who brought the architectural styles they were accustomed to so they could feel more at home in a foreign land. While many DFW homebuyers today might think home design has radically changed since these early days, you’d be surprised to learn how much the architecture of yesteryear continues to inspire homebuilding in the 21st Century.

Our founding fathers, including Thomas Jefferson, wanted the new democracy to reflect the great democracies of ancient Greece and Rome; so they created American Federal Style Architecture displaying classical order and symmetry in government buildings throughout the land.

During the reign of Britain’s Queen Victoria in the 1800s through the Great Depression was a prosperous time in US history as mass-production and factory-made building parts carried over a system of rail lines nationally. This enabled the building of large houses which were strongly influenced by Britain and many Victorian styles emerged and reached its crescendo with the Gilded Age, the wealthy extension of Victorian opulence.

During this period and afterwards, until his death in the mid-1900s, American architect Frank Lloyd Wright revolutionized the new American Prairie Style Home. Wright’s houses use low horizontal lines and open interior spaces, and always a strong connection to the outside both visually and physically. He introduced a Japanese serenity and brought a modernity as America’s love affair with Ranch Style Architecture was consummated in the lands.

After WWII Americans created bungalows, and with it, a comfortable informality as a rejection of Victorian-era opulence. The new houses moved toward increasingly simple styles to meet the rising demand for inexpensive housing. These homes began to be known as Minimal Traditional, the Ranch style, and the beloved Cape Cod Cottage. Architects slowly began to expand these styles with sprinklings of Arts & Crafts, Spanish Revival, Colonial Revival and Art Modern.

As the US government created HUD and FHA, the home industry matured into a big business. Home styles were mass produced and architecture became less dominant as home builders grew increasingly in financial power relying on the financing afforded the consumers through affordable, long-term, government-insured mortgages. Architects in many cases were replaced by less creative draftsmen who would replicate homes to be more cookie-cutter and repeatable at a profit for the builder.

In the 1970s, American consumers went big with their new houses in Neo traditional styles—Neo-colonial, Neo-Victorian, Neo-Mediterranean, Neo-eclectic, as oversized homes became known as the McMansions, seemingly a direct connection to McDonald’s and its Super-Sized fast food. The consumers could pick from an array of elevations that increasingly were a comingling of styles as the greatest hits of architectural features. In this case Architecture was imitating consumerism and endless choices of diminishing artistic appeal. Much like greatest hits music in vinyl albums during this period, if you play them over and over, the appeal diminishes rapidly, but unlike a vinyl record that can be easily replaced with a new one, a city neighborhood of greatest hits architectural styles cannot quickly be changed to another. So maybe we need a new playlist of architectural styles and shapes?

Until recently, after the Great Recession of 2008, the consumer started to re-examine its options as many homes were foreclosed, and the industry needed somewhat of a reset. Some of the main home trends post 2008 to today include: Modern, Organic, Tiny, Shared & Managed Spaces, and Freedom.

All these trends indicate less cost and more style and more time to explore life. A departure from rampant consumerism to a view of an evolved lifestyle.

At Grenadier Homes, we have always paid note to these trends since the beginning when we built brownstone townhomes and mid-rise apartments in Uptown Dallas. Today, we are focused on what we believe is the best compromise between the Tiny Home and the Larger Estate Home, the modern townhome. This 2- and 3-bedroom home displays an array of architectural styles from European to Cape Cod to modern, is connected to the outdoors visually (thank you Frank Lloyd Wright) and the small footprint and natural landscapes preserve the nature that surround it, and professional management rules and carefree HOA maintenance allow homeowners to GO AHEAD and LIVE YOUR BEST!

We Are Open! We are dedicated to keeping our guests and staff safe. More Information 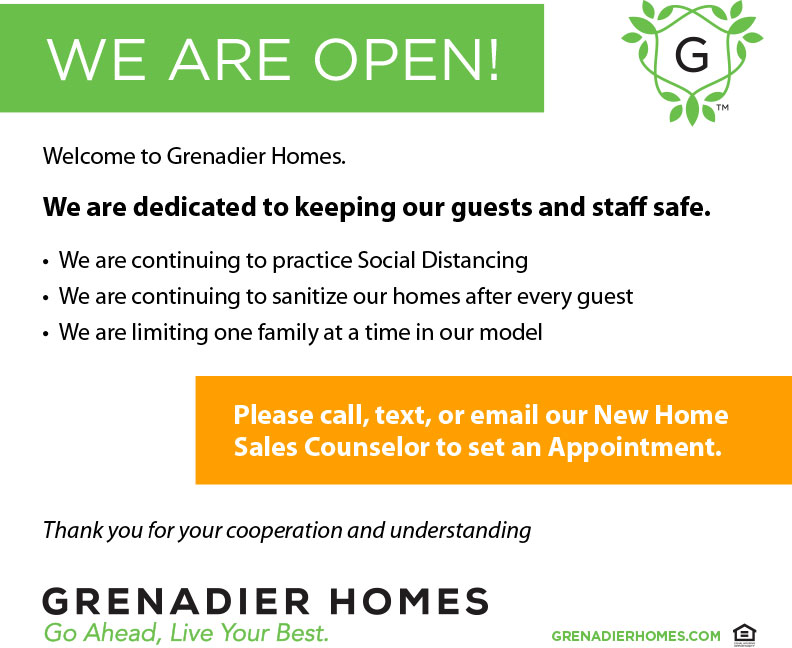