How the Great Room Became the Center of Your Home Over the last sixty years, the size of our homes has dramatically increased, but what drives that and what purpose has the square footage increase served us and our families? Today in our blog, Grenadier Homes is exploring the history of how the “Great Room” became the center of our homes and why the concept is here to stay in modern homebuilding and design. 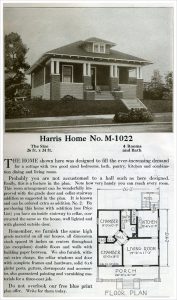 The Post War Home Explosion
The American Bungalow of the post war era was an efficient home that had human scale proportions and it had a distinct set of rooms: dining room, living room, kitchen, bedrooms and porch, and a set of stairs leading to an attic which, may be finished or unfinished. It was designed for the family at the time: a Nuclear Family with a go-to-work father, a stay-at-home mom along with two kids. In fact, it was very suited for its time, as life and families had more defined roles.

As the construction of homes became mass produced in the 1970,s builders of larger scale developments began to produce more home for less cost, and as a result, the home naturally grew in size. This competition for size literally became the idiom of “keeping of with the Joneses” as builders added more rooms for the changing demographics, incomes and lifestyles.

Enter the SoHo Loft
In the late 1960s and early 1970s, SoHo (South of Houston Street) was an un-named neighborhood that was illegally housing artists in poor conditions. The old buildings however, were cheap and available with the steep decline in business leasing the big spaces. On the inside, the designs were naturally big and open as they were previously created for industrial warehousing, garment manufacturing and other light industry. Courageous activists helped to save the areas from the wrecking ball and a huge highway project. Once deemed a real neighborhood, demand for the spaces increased and allowed the gentrification of the spaces into lofts. One of the most famous lofts was featured in the 1980s movie GHOST and this captured tremendous excitement for the design as the wide-open living spaces were truly GREAT.

The Birth of the McMansion
In the 1980s, the term McMansion was coined as homes grew even larger in size and their facades mimicked European castles on the outside. On the inside however, builders were busy creating the Great Room, and it was the signature space in the McMansion.

The great room combined many rooms: living, dining, and kitchen and side areas for other purposes and it was placed centrally in the home so that it became the epicenter of all family activity, and in other words, a soft-version of the SOHO loft.

Later, as movies could be rented or projected in the home, the great room was also created upstairs for the kids and later a media center was added for special purpose viewing, playing games and sleep overs.

Soon, outdoor living became more prominent in home designs and added to the competition of features to lure new homebuyers. The previously useable outdoor spaces quickly began to compete with the great room for attention and use. 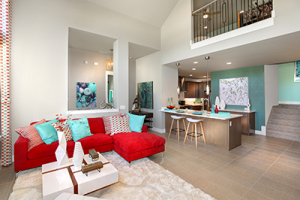 In the last few years, the size of the American home has started to shrink again, and the prominence of the Great Room has been reduced in scope as a result as costs of construction and utilities have had a double whammy effect in encouraging smaller spaces to reduce the total cost of the home and its on-going cost of maintenance. However just eliminating size of spaces or taking away a room is not the real answer or what the discerning resident is looking for.

From the practicality of Bungalows to the openness of SoHo lofts, our projects at Grenadier Homes that we build and develop incorporate many styles of homes and features. One of our most exhilarating developments includes a new construction loft midrise project near Deep Ellum with 12-foot ceilings, concrete floors, exposed ducts, timber wood ceiling beams, and large 8-foot-tall by 12-foot-wide windows. We evolved our designs to build attached Villa townhomes that all have a Great Room that incorporates the combination of an open kitchen, Livingroom and dining room with vaulted ceilings and use of light to enhance the space, and of course, the right proportions of each space for usability and beauty.

Our hope is this; just like those open industrial lofts, we want to allow ultimate creative flexibility for furnishing and living, we aim to provide a canvas that allows for three main goals:

What is your favorite design element from historical homes you would like to see incorporated into a new home? We love to hear your feedback and ideas!